"Sometimes you look at your reflection in a way that forces a reckoning, like that bird that flew into the window. You crash into your own reflection so hard that you simply remember who you are, remember that you are not another bird, you give thanks to those who help you remember, and you get back to doing what you are here to do." 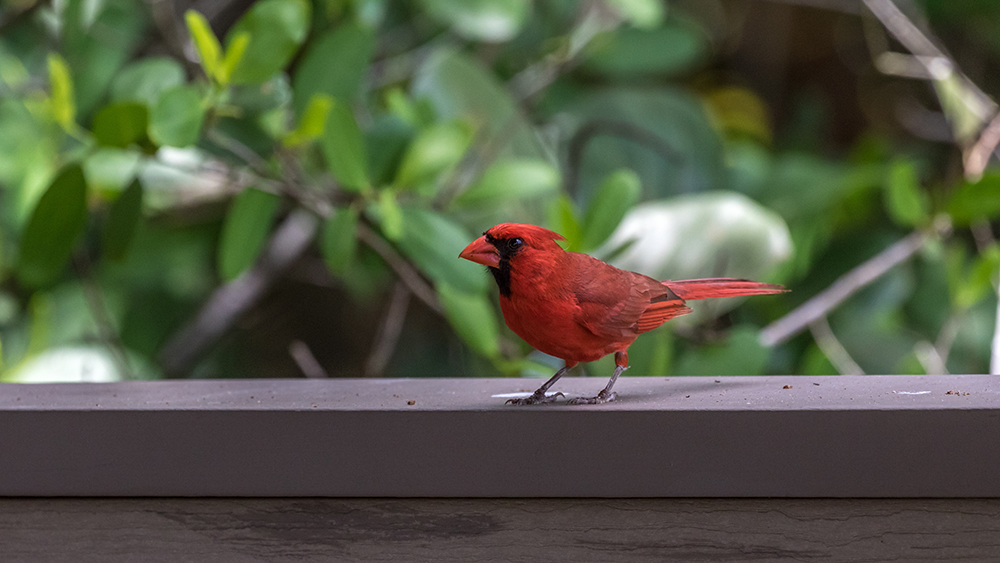 On the final morning of a Center for Courage & Renewal retreat, I stood in the hallway staring out a large window, watching a cardinal standing on a trashcan outside, three feet away from the window, looking at the glass. From the outside, the window is highly reflective, so the cardinal was likely seeing an image of itself, just like when I had been outside earlier in the day, approaching the door and seeing my own reflection in the glass.

So I stood there, watching the cardinal watching itself. Another woman from the retreat was standing next to me, also watching. Suddenly another bird approached the building and flew straight into the glass. Not too hard, but hard enough to make it fall onto the windowsill. The cardinal on the trashcan didn’t seem to notice, but we two humans both leaned closer to the glass and watched the dazed bird get to its feet, ruffle its feathers, shake its heavy head vigorously, and fly off.

The woman next to me smiled and softly said, “He just became aware that he is not another bird.”

I nodded and smiled. What a wonderful remark. She walked back to the room where we would have our final group session before departing, but I stood there at the window a while longer, thinking about the retreat and contemplating my own awareness of my true self. Am I aware that I am only myself and not another bird?

Looking out the window, I could see down the hill through the trees to the path that I used multiple times a day during the retreat: a long, winding 1.5 mile path that loops around a calm pond. In a matter of three days, I had logged 20 miles on that trail, walking slowly, jogging, and at times sprinting, trying out different speeds as a way to clear my mind, feel my body, find my breath. During one of my runs on the first day, I rounded a corner and something caught my eye. I stopped running and stood completely still. A kingfisher! The beautiful mowhawked bird swooped down from a high branch to the water’s edge, and the sunlight flickered through his feathers. Immediately the first line of my favorite poem by Gerard Manley Hopkins swooped into my mind:

The poem goes on to connect all of these images to the human desire to simply be and then act on the very thing that we intrinsically are. “Selves, goes itself. Myself it speaks and spells, crying “what I do is me, for that I came.” Each and every one of us, Hopkins suggests, in our myriad ways, contains something that only we can offer to the world, but it requires of us the awareness to cultivate it and the courage to bring it into being.

The next night I was back at the pond, but this time walking slowly alongside a rabbi I was getting to know through our time together at the retreat. We were continuing a discussion that had begun earlier in the day, both of us wanting to explore more this pressing question of leadership. It’s one thing to work on your own inner life and draw out “that being indoors each on dwells” and bring your most authentic self to your work. It’s a completely different challenge to help others do the same. He shared with me the challenges of leading a faith community that wants to look to him for answers, when he considers his greatest work to be not offering answers, but offering a spiritual tradition and practice that empowers them to discover their own rich inner lives. How do you lead people in this way, when so many of us have built habits on looking outside of ourselves in search of what can only be found within? What does it look like to offer the journey of self-discovery within a culture that lures us into a daily onslaught of images, messages, and transactions that diminish and alienate the self?

The rabbi and I circled the pond twice while unpacking this question.

Nearing the end of our second loop, we paused on the path. A full moon shone high in the clear sky, and the moonlight glowing down on the pond gave a mirror-image reflection of the night sky and the tree line. Again, I found myself reflecting on reflection, contemplating a mirror image. We stood there silently for a moment. If I had been back at home, I probably would’ve reached for my phone and taken a picture so that I could share it on Instagram or Facebook. I would have been tempted to capture this moment.

There seems to be at least two ways out of the sea of isolation, anxiety, and alienation that we all swim in: One is to seek immediate relief in the arms of others. And in our hyper-connected internet age, quick fixes are always at our fingertips. At its best, community takes place in rich relationship to others over a long period of time. At its worst, community becomes co-opted by any “app” that offers immediate connection for a small price.

But as I stood there on the shore with the rabbi, I entered into the other path out of my sense of alienation, which is to go deeper into my own small experience and find that it is not that small at all, that it is in fact expansive and abundant and rich. Instead of fixing my eyes quickly to a screen to take a picture, I can keep looking up at the sky, the stars, the moon, and allow my eyes to adjust to the ever-deepening universe that somehow both contains and holds us. I can gaze across the water and stare not at my own individual reflection, but the reflection of the night sky upon our planet, the universe gazing upon itself, a strange and wonderful notion. And for a while the rabbi and I just stood there, silently reflecting.

But he broke the silence to say, “In my tradition, there’s a blessing that has been spoken for centuries: Barukh ata Adonai Eloheinu, Melekh ha’olam, shehakol nih’ye bidvaro. It means, Blessed are You, LORD our God, King of the universe, through Whose word everything comes into being.”

A few more moments of silence passed. I then recited the Hopkins poem. I had little else to offer, so why not lean on these wiser words and let them be enough, even if we arrived at no solid answers that night at the pond.

Sometimes you stare at your own reflection for so long that, like Narcissus, you risk falling into yourself and drowning. Or sometimes you stare at a screen so long that attention becomes so fractured that there seems to be little self left to discover. We always run the risk of either ruining ourselves in vain conceit or losing ourselves in fractured stimuli. But sometimes you look at your reflection in a way that forces a reckoning, like that bird that flew into the window. You crash into your own reflection so hard that you simply remember who you are, remember that you are not another bird, you give thanks to those who help you remember, and you get back to doing what you are here to do.

Andrew Johnson is a writer, speaker and community activist living and working in the midtown area of Kansas City, Missouri. He attended both the Courage & Renewal Academy for Leaders as well as Courage to Lead for Young Leaders & Activists. Andrew is the executive director of Pilgrim Center, a public chapel providing an open space where neighbors connect and build a stronger community. For more info you can visit suchsmallhope.com or pilgrimcenterkc.org. He is the author of On Earth As It Is.

We offer an abundance of resources to help you learn more about our approach and explore the ways in which our work has meaningfully impacted people’s lives.

See all resources
of

Please confirm you want to block this member.

You will no longer be able to:

Please note: This action will also remove this member from your connections and send a report to the site admin. Please allow a few minutes for this process to complete.

You have already reported this
Clear Clear All